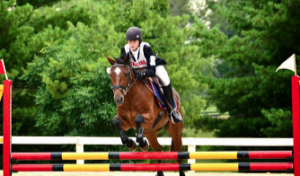 Grace, Class of 2015, is an accomplished rider. Grace was also Park Scholar Finalist at Ithaca College, but felt Marist to be a better fit.

Jessie helped both of our daughters find their unique voice and through the process they became more confident and better writers. This was undeniably valuable for my now freshman at Marist College because she continued to develop this new found skill in her freshman year writing course and used the writing center at her college, just as she had learned from working with Jessie, to help her edit and improve her work. She understood this process because of the work she had done with Jessie on her essays for her college applications. She was admitted into 6 out of the 7 schools she applied to and was waitlisted at that school. I do not believe she would have had the same result without Jessie's help. The significant merit scholarship she received was likely a result of working with CompassU. 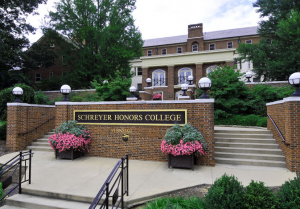 Our second daughter is a very talented student, ranked first in her class, however writing was not her strong point. Sofie needed a very different type of guidance to help her find her voice, but Jessie really understood this and although she took more time to develop a comfort level with the process, she applied widely and therefore wrote over 30 essays in the process. She interviewed at many of the college and the entire process was like a taking a course in how to develop a stand-out application for the most competitive schools. She was accepted with scholarships to many excellent institutions, but the one she selected required eight essays as well as an interview after the application for the university accepted her as a student. The Schreyer Honors College had a 7{475f6e8ad7be3161114314a988b7e8f491719bdeedead1da50322e1eadee8259} acceptance rate in 2016 and with the amount of essays necessary to apply to the college it is a clear reflection that Jessie and my daughters work with CompassU had a deciding factor that she is now an enrolled student at SHC at the University Park campus of Penn State University where only 300 "scholars" are accepted into the program each year. The SHC offers each scholar an academic scholarship and a competitive and unique college experience.

We have a son who begins his high school career this coming fall and we are certain that he will be working with Jessie to develop not only a stand-out application for him, but engage in a process that will teach him an awareness about himself he will use as he enters his college years. Jessie is not only helpful with knowledge and information about the college application process, but also she really helps the students find their own voice, their own schools that they can see themselves attending and she tailors the process to a student's individual needs.

We have enjoyed this time where many families describe the process as stressful. Working with Jessie and her colleagues at CompassU made this possible. Thank You, —Patricia and Greg
·
By Jessie Peck Martin
·
Under TESTIMONIALS
3 min read
Like
Share Tweet Share