Does The Drop-Off Get Any Easier? 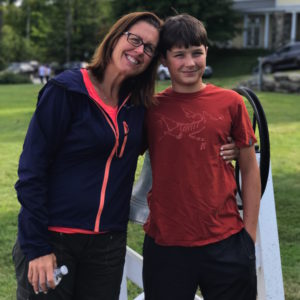 Does it get easier? clients and friends will ask, referring to the school drop-off.

We’ve done the drop-off, the send-off, the lugging of rugs and small fridges and the fret of bedding with three so far for a total of nine times. And, did it get easier? Well, yes and no.

2009, Bryn—Our oldest slept just 25 minutes southwest as a freshman at the boarding school I had attended (as a day student, mind you), and for months I’d go to sleep and feel the missing energy in the house. Where there were four, now only three. The hole took up residence as an ache. The first two months I’d make excuses to strap Aaron into his booster and Mary into her car seat, and load up Buxy (our Vizsla), who perched shotgun. In the spring, finances were tight, so we broke it to him that he would need to be a day student the following year. He was relieved. “Oh good, I’d rather be home.” The extra bedding, fridge, mirror, and lockbox found a home in the corner of the crawl space in the basement.

2013, Bryn—The second drop-off came five years later. Following an industrious gap year that included A LOT of driving younger siblings to and fro, we bundled up the bedding, fridge, and wall coverings and drove west 14 hours to Chicago. His girlfriend at the time stopped texting him mid-drive (I didn’t ask why.), and his ache and trepidation rode right along on 80 East. By the time we arrived, our spirits lifted, and we got caught up in the two-day drop-off extravaganza. We were holding it together until we participated in the final event: All the freshman families walk in a parade led by bagpipers, and at the end your baby heads under an arch with his classmates and you are left standing to the side, looking at a handmade sign held by an upperclassman, “It’s okay to cry.” I refrained from yelling, “You are correct!” And then I cried.

I cried until a rest stop in Ohio. There we bumped into three other UChicago families; moms were puffy eyed, dads looked exhausted. We had an intervention in front of the Sbarro. Dave said, “Jess it’s time to leave.” Really, it’s time to leave? Already? I feel connected to these people.

2014, Natalie—At the same gate where my in-laws had been handed a warm plastic cup of beer by a couple of friendly fraternity brothers trying to ease traffic in 1984 before dropping off my husband, a jovial security pointed us up the hill toward Mountaintop Campus, where our daughter would begin her freshman orientation at Lehigh. In the dorm parking lot, a swarm of kids in matching tee-shirts grabbed the items faster than we could unload the car and hauled an obscene pile of stuff (who needs this much stuff?). And, I pointed out that her dorm was just steps away from my freshman dorm. Once in her room, I made the bed realizing that she had purchased the memory foam topper, the polyfill “feather” bed, the cozy blanket, the down comforter in a duvet and the Euro sham, two decorative pillows, and a body pillow (Did I really send her alone to Bed Bath & Beyond with my Amex?). As soon as things were in place, Dave said, “It says we are to leave.”

“What do you mean, leave? Already? We just got here.”

“Leave. Parents are to leave. 4 p.m.” He provided the backlit proof.

I cried from Bethlehem to Easton. He went back to take her to lunch four days later.

It’s gotten easier to drop off the Bigs. Now they get themselves and their things to school. We show up when needed; they come home when needed. And, as much as I thought I had learned what I needed to learn about dropping kids off, Aaron, our third child, asked if we would consider sending him to boarding school. As an eighth grader. We considered it. He kept asking. He kept sharing his research. We said yes.

2017, Aaron—We loaded up the car and drove 3 ½ hours to Vermont. We lugged. We hugged. We attended orientation meetings. We bought coffee mugs and flannel PJ pants. We took a photo. We hugged again, and then he went to dinner. And we drove home.

At breakfast the next morning, I found myself misty eyed after reading a poignant and honest account of one mother’s first college drop-off. I turned toward my husband, “I am crying over this woman’s editorial. I viscerally feel her pain, but I didn’t shed a tear dropping off Aaron? What does it mean?”

The last two years, looking handsome but oh-so-resigned in his Catholic school uniform, Aaron had begrudgingly gone to school. I’d ask about his day, hoping for a response that never materialized. Instead, The words fly over my head. I have to “take it easy” when playing Dodgeball. IT IS DODGEBALL. The ball is like so soft. We only have five minutes between classes. The hallway is crowded. All of which was to say, “I am frustrated.”

Listening to your kid is sometimes one of the hardest things.

What does it mean if what has worked for the other three doesn’t work for one? I thought we had at least a few more years under this roof?  The roof where I shuffle laundry between taking client calls and chopping carrots and teaching them how to cover a textbook in a paper grocery bag and roasting chicken (really, chicken again?) and reading them Robinson Crusoe. Am I doing the right thing(s)? Are we doing the right thing(s)?

The drop-off is never easy. Parenting is never easy. What resonates most in the bittersweet business of parenting is that it is not about Dave or me. It’s about doing everything we can, sometimes messily and bumpily and imperfectly, to help our kids become the people they are here to be.